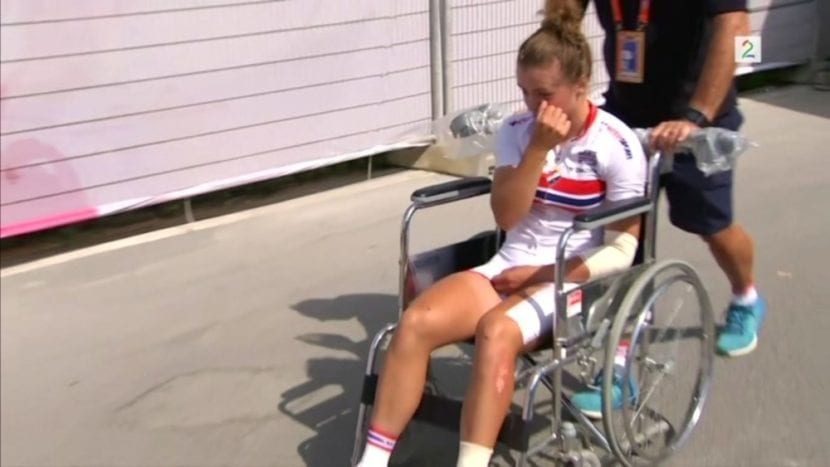 Norway says their junior female star was deliberately hit by a police car because she was wearing shorts riding back from her Worlds TT. Susanne Andersen is seen above being taken to hospital though she did not sustain any broken bones and went on to take bronze in the road race days later.

Norwegian Cycling Federation officials have accused a Qatari policeman of running over a junior rider at the recent Road World Championships in Doha.

18-year-old Susanne Andersen had won a bronze medal in the women’s junior road race and was riding back to the team hotel when she was hit by a car driven by a uniformed police officer.

Speaking about the incident for the first time, Hans Falk, sports manager at the Norwegian Cycling Federation, told TV2 Norway that he was convinced the action was intentional.

“I am convinced that it was a deliberate action by the policeman who drove right into Susanne.

“There were no skid marks, and he showed no empathy. Instead he lit a cigarette and talked on the phone oblivious to the girl who was lying on the ground and screamed.”

Thankfully Andersen suffered nothing more than cuts and bruises in the incident, but Falk said that the Norwegians were told not to report the matter to the police for fear of not being able to leave the country.

“We were urged not to report the matter to the police in case we were not allowed to leave the country. We thought it was best that Susanne came home before the case took a more serious turn.”

This site uses Akismet to reduce spam. Learn how your comment data is processed.