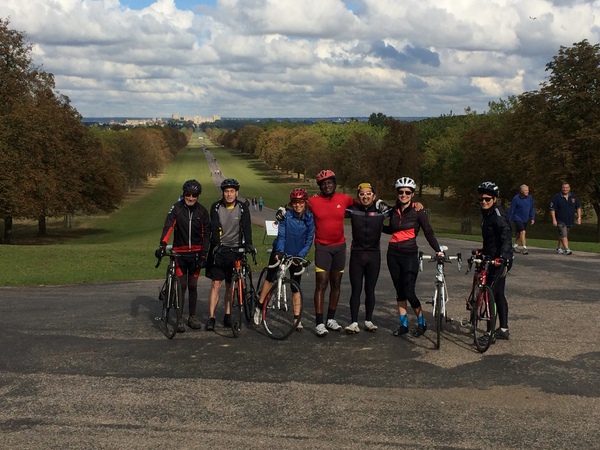 Another great day out for all with some outstanding riding! Five groups out in the end, enjoy the ride leaders respective reports!

First of all sorry for forgetting my helmet. 🙁 bad example..

My group had: Niall, Nic, Sabina, Ágata, Lydia and Samuel

We took a scenic route for the steadies going via Bushy Park, Virginia Water and Great Park. Niall was at the back helping out which was really helpful.

Lydia did very well and spend all day on my wheel (sometime free wheeling) I told her to practice and time her laps and soon she will be promoted to inters. Ágata also did well for someone who was away from cycling for few months. As well Nic keep up all day sitting on Ágata’s wheel.

A few general tips would be for some would be to try and stay closer as a group and to stay in mostly single file, or double where the roads allow.

Niall peeled off just after Datchet to head home, after that I’ve been asked by the whole group to push little bit more and all of them manage to keep up with the pace.

Rider of the day goes to Lydia for having a ‘good control’ of her bike and riding very well in group.

We had a good size group of 7 for Inter +  (Me, Debs, Ali G, Damian, Simon, Simon, and JD). Again, 3 of the team sported their HUNT wheelsets – Debs, Damian and Simon.

We left on time and had a very fast and flat ride out to Windsor, with no traffic lights or stoppages at all. We averaged 22mph to Windsor which was good going. We had a brief stop at Tesco to take a breath and adjust saddles (Myself and Simon).

After a fast and bumpy descent (in the central lane) into Henley we were treated with lovely sunshine and always good coffee at the Chocolate Shop on the river in Henley. The Advanced Boys (Richard and Paul) were still having lunch in the café.  After lunch JD was convinced by Richard to join the Advanced boys on the return leg, so we were down to 6.

After lunch we made the always scenic route towards Marlow where we were treated to the only climbs of the day. We shared the front on the way home with each rider taking a turn, while maintaining a good 21 mph. The group was very social having ridden together many times.

None of us were planning on the pub, especially with the impending weather. Sure enough, at 4pm the heavens opened and those still on their way home (Scott, Debs, Ali G) were soaked!

Another lovely and fast day of cycling with Team HUNT, including Simon with a massive hangover (rider of the day). 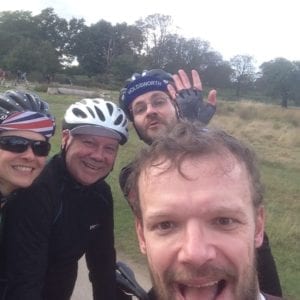 I was leading a group of inters to Twyford with Sib as backmarker.

Everybody performed well, nobody bonked, nobody dropped out and we stayed together as a group for the whole time. We rode at a constant speed of 28 km/h on the flats what is around 17 miles and suitable for an intermediate ride.

We had short stops in Datchet and Windsor for flapjacks and a comfort brake but apart from this we never had to stop or wait to keep the group together. We stopped in Twyford and had our lunch break in the Waitrose cafe outside – not spectacular but ok I think

Mark had a little crash in Walton on the way out as he was used to his MTB’s disc brakes and didn’t manage to stop at a traffic light but didn’t take any harm from it.

Will and Patrick did well. Smooth ride back and we just stopped briefly as Patrick had new cycling shoes and had a numb foot so that we had to stop for 5 minutes in Sunbury

So we had Alex Gold giving us a guest appearance at Intermediate level, swiftly followed by another lazy bum myself, and Cindy, Paul C, Hannah, and later acquiring the wonderer that is Keiran.

This smallish group made for a nice and peaceful ride all in all. Most took their turn on the front with Paul/Keiran doing the majority, with myself/Alex more than happy to sit back and admire!

Twyford was nice enough, though we might have been the biggest thing to have happened there this year by visiting! 🙂

We managed to make it back by 3:30pm to smash our target time, and even avoid the dounpour! Double bonus!

We’ll be posting next weeks ride tonight/tomorrow folks. Just a reminder to try and get to the park for 9:45am as a few were late this week and jumped on possibly the wrong level group for them. No biggy but worth pointing out. Thanks to Richard for marshalling the troops and see you soon! 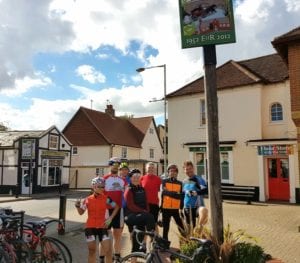