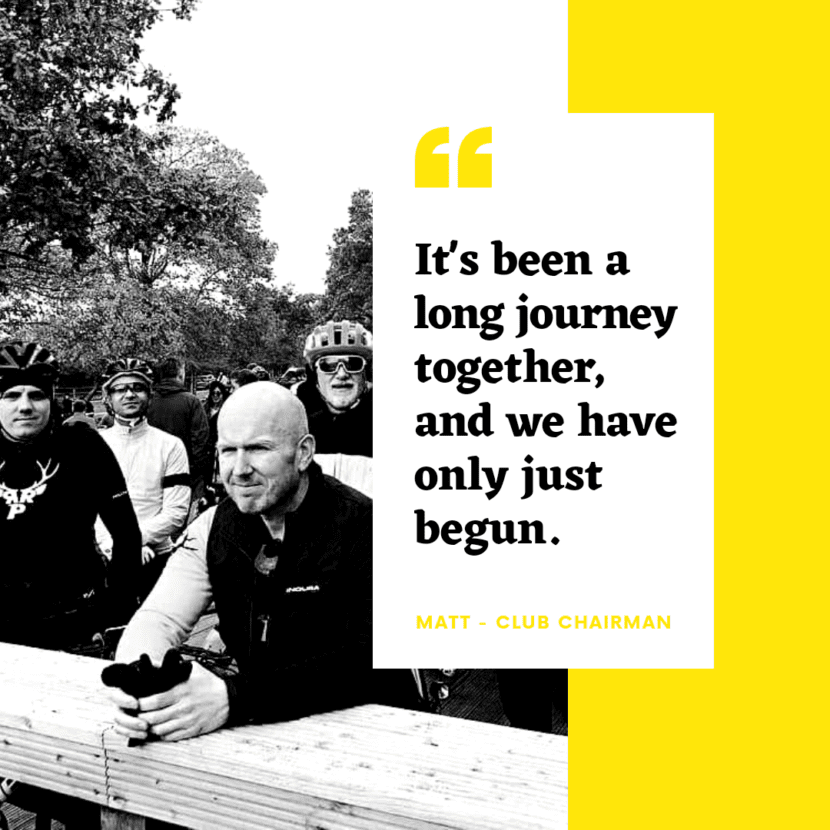 As some of you know this year is a special year being our 5th Anniversary as a club, we had our first ride in Nov 2014 out of Richmond Park so there has been a lot of change since then. I want to say a big thanks to all those who have volunteered their time to help the club during this initial period, without you we wouldn’t have a club.

We have come a long way since then, with only myself running the club the first year. We have since been ran by a team of volunteers on the club committee all putting in their time for free to help organise club events.

At the beginning of this year we had to fill our Club Secretary position at short notice and we are grateful to Adam Steinert for coming in and making the role his own. Adam has been a friendly and approachable addition to the Rouleurs committee in what is an important role in the club.

Michael Ohashi also rejoined the committee during this period after taking a break and has been another great addition, always willing to help answer new members questions and to organise fun events, which leads nicely to him recently taking on our vacant Club Social Secretary role.

Daniel Nascimento has recently stepped into the Club Ride Co-ordinator role to help me organise the club rides. This is always a huge job which we are looking at ways to make the club rides better, with ride rotas, varied routes, start times, etc. The emphasis being a varied choice for ALL members of different levels. These will only continue to work if members do volunteer from time to time to take a group out, either by putting your name on our google sheets ride rota or just comment on the ride meetup itself.

Also stepping on board the committee is Andrew Jones who has been a valued member this year, as well as Alejandro Acosta(mountain biking) and Amy Simpson(Ladies RIdes) helping out at our meetings recently. They join Sally Doyle(Club Welfare Secretary) and Adrien Ricoux on the committee.

As with all things as time goes by we will get people moving on. This year Roger Horton will be stepping down as Club Treasurer for a well earned break. Roger has been involved from the start and had a huge task helping set up the club accounts in the early days. Since then he has been unofficial kit man as well as helping with membership queries, so a big thanks to him.

Also stepping down this year will be Sibylle Ermler from Membership Secretary duties. Another who has been a member from the early days and given up a lot of time for the club so a big thanks to Sib.

Also helping out at club meetings recently in a more casual capacity have been Rachel Beadie and Hannah Derbyshire who will both not be around for meetings this year due to time constraints. A big thanks to both.

So we are on the lookout this year to fill both our Treasurer/Membership Secretary positions. If you are interested or know anybody who is then please get in touch with myself or one of the club organisers.

So people keep asking me who we are, and what we are about, and where are we going? Not an easy one to answer in one sentence but I will give it a go. We are a fun, friendly social club who happen to love riding our bikes.

A lot of our members become friends after a while, and are just as happy enjoying a drink in the pub after a long ride as they are riding in the peleton. Richmond Park plays a big part in most of our lives, with most of us living on the outskirts or commuting through daily, as well as meeting there most weekends.

We are a volunteers club, with ALL the money staying in the club which goes to subsidised member events, socials, etc..

We do have a lot of members who like their longer rides, as well as signing up to outside sportives/audax’s, but also a growing number who prefer a shorter social coffee spin. We have been running our Saturday Newbie laps rides around Richmond Park since the beginning which are always a popular event.

This is a key part to our club over the next few years. Without new members each year then all clubs go stale which is not what we want. We currently have around 200 full members. Luckily for us we have had another good batch this last year which have been smashing some big events, chapeau!

As most of you know myself, with some help from Michael, have been putting in a lot of work on our social media channels the last year or two. Meetup is a handy tool with a steady stream of new members, but it’s a pretty closed shop to outsiders. Unless you were on Meetup in the early days, you wouldn’t know Richmond Park Rouleurs existed. Hence us spreading the word on Facebook, Twitter, Strava, and Instagram with happy smiling Rouleurs in club kit most weeks on our channels.

The big thing here is club kit. The only way to advertise our club properly is by members wearing the club colours, it has a powerful effect on those on outside and in. This is becoming one of our main ways of new members joining as they see us riding in the kit out and about on club rides, big events, or in the pub. If you go to any major cycling event in the UK calendar you will always see club colours of your local cycling club, it’s a great way to see who is doing what and represent your club. That is our goal over the next five years, to see the RPR antlers flying all over the British cycling scene…and beyond! 🙂

So with this, we have released a newer version of our club kit in grey colours which are much more summer friendly. It mixes well with the current black one and another exciting development for the club working with our new kit suppliers Saddledrunk this year.

Where are we going?

I think the club is growing and changing all the time, which is exciting. In the beginning our general core group on a Sunday were a certain demographic of road cyclists, preferring late starts with no rush to get back from the pub at the end. Although we still have that social element in the club, we now also have members who wish to ride earlier so they can ideally get back early for family/work commitments. Recently we have started our “early bird” rides so we can try and cater for more, which seem to be going well.

Organising our own open events are the next natural step forward. We have dipped our toes in the water the last few years by having a Rouleurs support van on the Chase The Sun Sportive, and in only a few weeks time are embarking on our nine-day Lands End to John O Groats Cycle, with 12 of us attempting the 1,000 mile ride. All with RPR van support and organised by us, check us out! 😉

As many of you know from attending, other local clubs run their own open cycling events yearly which are a great way to spread the word and meet other clubs. So a Rouleurs Annual Sportive/Audax ride is obviously on our list, for those who have idea or want to help out please get in touch(as well as other events).

So an exciting time for everyone, and hopefully gives you a glimpse of what we have been doing behind the scenes. Where we intend to go, and how we hope to get there! It’s been a long journey, and we have only just begun!