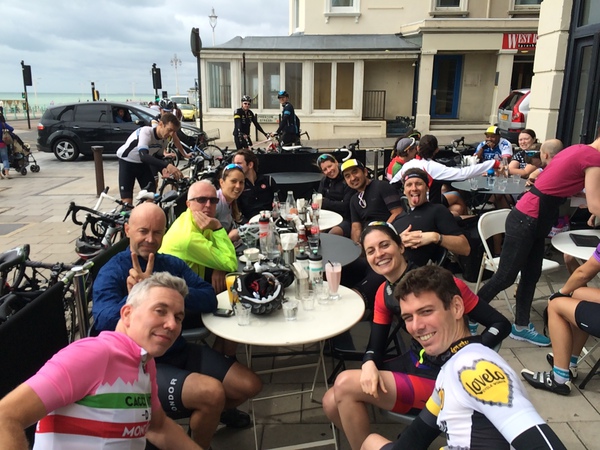 So another fantastic ride out with the gang to Brighton, with some epic achievements by all involved. Here are some of the best parts of the ride leaders feedback from the day!

Myself, Bart, Debs, Rchard and Michael.

Inters Riders of the day: Michael Griffin and Deborah Goodwin

Funny Story: Being held up at Turners hill as Richard had used his combination lock to secure his bike at the pub but…………had forgot the number!

And not forgetting Denise saving Bart with tea and ice cream on the return leg! 🙂 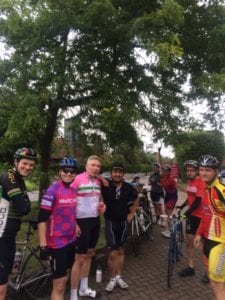 9 of us:Me, Hannah, Paul, Gosia, Amir, Will, JD (mega high cadence all the way) plus newbies (to me):
A good bunch, stayed reasonably tight, regrouping at junctions, checked with them the pace was OK as I did lead for a good majority of the way, with Graham helping out also and let him spin off the front a few times, a bit was clearly he was better level of fitness, but was tired by the end.

Intern team: Great team effort and vibe for duration, communicating when man down, and sticking together, looking after the newbies!
Gosia –  Great work on her first Brighton spin, up Ditchling in good time!
Ivan – Massive kudos for keeping pretty much with pace all the way despite wind resistance with extra weight – rack, pannier massive lunch box of food, large bottle of water and extra clothing :).. maybe try using the back pockets and ditch the pannier (from the gal who used to bring enough gear for weekend on every club ride 😉
Graham – modestly planned cycle return to Dorking only but powered on all the way to club house!

It was just Graham, JD and I from my group for return, we joined with Adam, Debs, Jai/Bart (Lithuanian guy), for me a lonely once we left Brighton as they set off up Devil’s Dyke like the clappers!   I was pleased when regrouped some miles after Devil’s Dyke and be somewhere in the mix most of the way back.  I didn’t plan return but as it was a steady pace to Brighton (also route seemed less hilly and more direct via busier roads), and I just wanted a bit of workout.

Kudos for Pub turnout:  all from our return gang who made it to the pub despite more miles to get home.
Nice to be back with gang and banter in the pub!  Got home just as it started to rain!  Will rest the knee this week but think next week maybe a Sunday off the bike.

Things to improve
One or two riders sometimes riding out in middle of road, when car behind.  General bike maintenance for one or two(oiling chains). Team Improvement: when cars behind, communicating, keeping single file and back marker (having acknowledged car behind) wave car through (being aware the group is in check, ie single file) and when safe to do so.

Magic Cake find 🙂
The surprise find of Tanhouse Farm shop instead of petrol station (as they were getting ready to shut), for delicious coffee and cake.
A nice civilised half hour break for banter, before hitting the road with revived legs.
“Prize”
JD… If there’s a prize for highest cadence and maintaining it the whole day…JD’s your man, I thought he’d get a blow-out but lasted the distance.  Don’t recall him ever using his large chainring! and he did his bit up front and gave Adam a chase for his money the return leg, up front, (I think).
“Other moments”
– The donkeys at Tanhouse taking a fancy to JD or Adam following them all the way along the fence as we left 😉

On Sunday I took a rather large group as Advanced which were well matched with ability and speed. 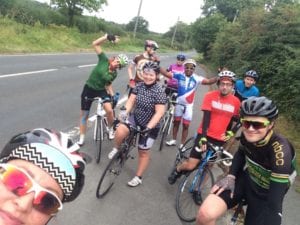 We started early as Chris was on time! The group were instructed to each take turns of 2-3 mins at the front and peel off on the right to the back, ensuring that everyone did a turn but also got a good rest, in order to keep our pace up.

Things started very well until Sam got a puncture early on, meaning we were passed by Adam’s Inter group. This gave us a good target to chase but they were too fast and we didn’t see Adam’s group until the rest at Turner’s Hill.

The group rode very well, disciplined, heads-down, taking turns. Our efficiency and team work allowed us to soak up the miles taking minimal breaks (Turners Hill, top of Ditchling Beacon) until lunch in Brighton. On the way back a few of the team were more tired than the others with Sam, Nats and myself doing the lion’s share of the front with good stints from Damian (who had to be told to go take a rest!)

Rider of the day was Abby who powered up the Beacon on the only aluminium frame in the group and Natalie who killed us with speed whenever she took the front!

We worked as a team, no one was dropped all day and everyone was looked after. A very efficient and semi-pro club run by experienced cyclists – it was a pleasure to lead it! 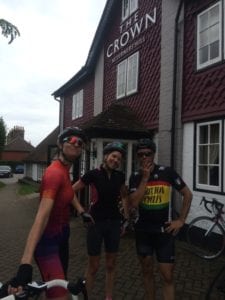 So a fine day out by the “other” advanced gang. Myself, Richy Rich, Martin(coffee) Conway, Chris H, and Paul/Darren(two new guys to the club).

A cracking turnout by our little mob, and they even turned up on time for duty, swiftly departing at 9:00am on the dot. I am truly living the dream! 🙂 So we set off for our mini adventure, and it soon transpired that all plans we had of taking it easy on the way were quickly shelved as Paul and Darren proved to be quite nifty on the front of our group. I’m sure it was appreciated but cant say I was that devastated when myself/Martin became separated from the group at Turners Hill due to a small miscommunication as to whether to stop for a water break or not, we pootled before stopping and then regrouping with the guys at Ditchling.

Rolling into Brighton we were just patting ourselves on the back for how fricking amazing we were for getting there in 3hr15mins, a PB for some. Only to see the Sloth(Mark) roll up behind us who had managed the ride in 2hrs30mins after having a lie in until 10am. Some people!

So for the return leg we set off, and up the mighty Devils Dike. In which it must be added that I(fat non climber) managed to sneak past THREE esteemed mountain goats in Chris H, Conway and Sir Rich on the climb up and past the golf club, dreamland indeed!

We had a quick stop in Dorking at the glamorous Tesco outlet before crawling home. To cut a long story short. We all made it back alive but we probably need to work on our group riding skills a bit more. Admittedly the Sloth was too strong for us mere mortals so generally a battle just to hang on for most. But might be easier to stay as a group rather than fighting the inevitable. I am selling this right? This wasn’t fight club I must reaffirm, it was conducted in a controlled environment! 🙂

Again a great achievement by all and as Denise said, a cracking turnout at the Hare and Hounds. Special mention to JD and Mon for their Ditchling Devil times, stunning stuff.

See you all soon.

One thought on “The Brighton Burger Run: Ride Report”