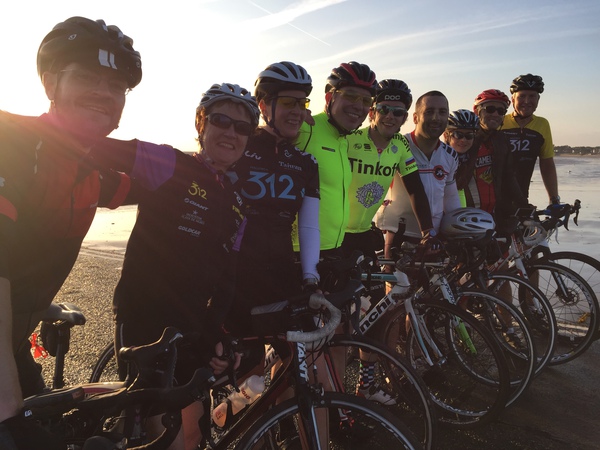 As you know some of our members took part in the epic sportive that is Chase The Sun recently, a coast to coast cycle from Kent to Burnham-On-Sea which we joined at Richmond Park. This was a challenging ride which our members tackled with buckets of determination and courage, with more than a few laughs thrown in. Here are some of their stories! 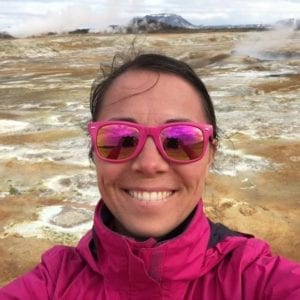 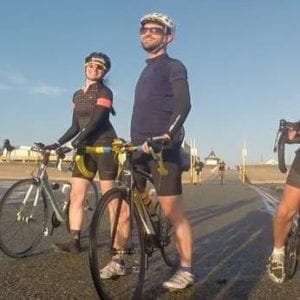 There was a good team spirit in the chasing pack of the advanced group…  Myself (and pannier), and a double puncture Andy Pearson took great pleasure in alternating strong turns on the front to try and bridge back on to the Rouleurs Peloton.  CTS strays that had started from Kent were welcomed on to our back wheels as we punched a hole from East to West.  As the miles disappeared, and an average of over 18mph was consistently maintained, we finally bridged to the Steady group.  We were massively impressed that they had stayed ahead for so long, with a tremendous average pace, enthusiastically led by our fearless leader…who shall now be known as “Quidgey” (because our landlady couldn’t read his name properly)!

Shortly after we saw another long line of cyclists, with the ever imposing front man Roger leading the pack.  We cruised on by with a little wave and natter, knowing that we wouldn’t be too far away from the first stop fora refuel.  Another little way, and we’d passed a splinter group from the front, and we knew that we were not far away from catching the leaders.  As we edged within 5 or so miles off the first pit stop, we picked up Monika and Mark, and proceeded to cruise up the road, as we had finally spotted the leading advanced crew!!

Finally back together we grazed on pastries and flapjacks with a little caffeine hit… We decided to get back on the road ASAP so as to not let the rhythm fall off. We took off with 4 of the advanced crew, and set about getting back up to pace once again.  The aim was to get to Pewsey Tea rooms first so we could get the old girls busy making sarnies before the rest of the Rouleurs rabble descended on to them… They’re terrifically slow, but you’ve got to love the fact they are all volunteers, let us abuse their outside space, toilets and generally make their lives miserable on a Saturday afternoon.  Not much happens in Pewsey unless CTS comes through it would seem…!

Once again the steadies were not far behind, and bearing in mind 100 miles was fast approaching, Matt clearly had his group cruising at a terrific pace.  Only the back end of the Advanced crew beat them to the rooms, as the intermediates had been persuaded to lunch at a pub…I suspect Roger had nothing to do with this decision 🙂 Good idea though, because any more at Pewsey would have caused cardiac arrest in the tea shop. We opted to leave the remaining 3 advanced in the tea shop as a punishment for not helping with Andy’s puncture…come get us we chortled as we blasted off in t 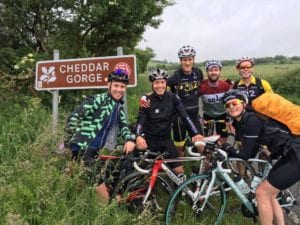 he search for some sodding sun.

We knew that there were some long, windy undulating sections coming, so wanted to keep the pa
ce steady, and kept spreading the love at the front.  Andy did some big sections tapping out 220w on the front, and when asked, he claimed that he “Bloody loved it”, so we left him there as long as possible… Our progress was halted somewhat when a large herd of cows were being ushered into a neighbouring field.  Monika then had to stop to remove cow excrement from her leg…but we won’t mention it ;).  We stumbled across one of the CTS Kent contingent that Pearson and I had towed for 20 miles, and he was still going strong.  Big kudos to that man…he’d been on his own most of the day!

Before the Mendip hills, there was one final coffee break at a pub to get on board water and get that last minute kick or energy.  All groups, merged together, took a break, and got going almost together…it was poetic…sort of..!  We set off again, the natural split in the groups as the hills started to test the legs.  With the glorious temptation of the Cheddar Gorge Descent wiling us on.  The groups splintered again, but Pannier man rolled on with Sir Richard, Andy “Frome” Pearson, Alex V, Ohashi and Monika up at the front, turning the screw against a frightful head wind heading into Cheddar.  The pace was ramped up and the pedals had to keep turning deep into the Gorge to get down – it hurt, but what a bloody downhill section that is!  By this stage, the tanks were empty, but we knew the best ice cream in the whole of England would be at the bottom, and indeed they were!  A delightful re-fuel, stuffing our faces with sugary treats, waving in the rest of the Rouleurs to get their fill as well.  Loads of smiling faces after such a thrilling descent and the joy of 60 flavours of marvellous ice cream…and the bloody sun had finally arrived to see us in too! 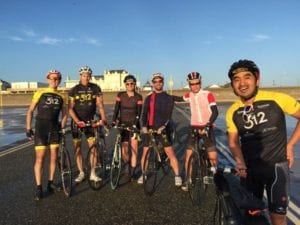 Advanced led the way once more, battling the final miles against a hefty kicking from the seaside wind edging ever closer.  We rolled in to a cheering finish line in a little under 12 hours, averaging about 17.5mph for the day.  All the other groups rolled in soon after, the sun was still up, and we could relax in the local Wetherspoons for reasonably priced calories and celebratory beer!

CTS remains a great challenge and truly delightful cycling adventure…I often wonder if I’d be any quicker without a pannier, but then again the group did enjoy their time behind “the bus” to break the wind.  Would I do the full thing from Kent..? Probably not!  I get to ride in the Sun (when it’s there), for the day, and then have the energy to recover the legs, smashing it up Cheddar Gorge on the Sunday, and finding lovely farm shop tea rooms for breaks.  Taking in some more glorious, almost empty country roads, before heading back to the busy Smoke when the experience is all over for another year.

Shall we do it again in 2017..? Of course…and I’ll probably bring my pannier once again 😉 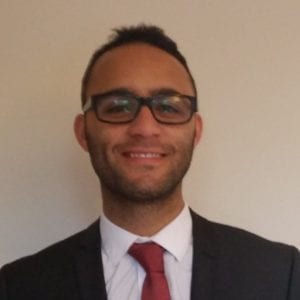 Favourite part was the last 10 miles where I knew I had almost completed the sportive making Chase the Sun the max amount of miles I have ever cycled in one day.

Rider of the weekend I will give to Francesca, she arrived after every one else. She rode the last 50 miles by herself and she managed to make it all the way. Well done to her.

I would definitely do it again. 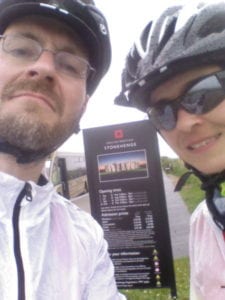 The whole weekend was fantastic. It was very well organised, by Matt on the RPR side and the CTS organisers on the whole, and I enjoyed every bit of it. Especially after the sun came out later on the day and we had a glorious descent down Cheddar Gorge after struggling against the wind, being rewarded with delicious ice cream at the bottom. Other favourites were the posh baguette at our lunch stop; fruitcake at the CTS stop; goats, sheep and cows along the way; and of course all the camaraderie, determination and encouragement between all the riders on the CTS. Plus a big thanks to Kate, Adrian and Michael for taking our bags to Burnham.

The hardest part of CTS was on top of Cheddar Gorge, when I made the foolish decision to try and catch up with the front part of the group on my own against the wind. Luckily, I got saved by a couple of riders starting after a break and letting me tag along.
The hardest part of the weekend was on the way back to Salisbury train station, when it started pouring down with rain and my legs were telling me that they did CTS on the day before.

Rider of the weekend goes to Matt for doing the whole return.

Would love to do it again, but if possible take Friday off and do it from the start. 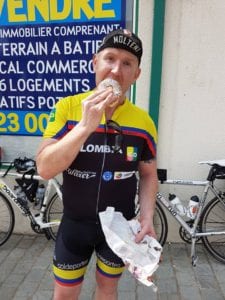 Ok so where do we begin? First of all what a turnout for this epic cycling challenge, the Rouleurs had a grand 33 members out for the event, smashing stuff. The day started in good fashion with everyone on time, even arriving before little me carrying my CTS sign for the organisers.

Once we split the groups we all settled into the ride. I was with the Steady group to help get them as far as we could, little did I know what determined people they are ha. We shortly started catching up with the Intermediates as they had quite a large group of 13 compared to our 5 so a little easier for us to navigate through the traffic. By the first proper break 40 miles in all the groups were together, our group only had a shortish break so that we could eat massive time into the Advanced group whilst they stuffed their faces on savory treats!

For whatever reason(awesome leading), the Steadys managed the stay away for quite a few miles at the front until the inevitable happened and we were swallowed up by the other guys. Just as I was contemplating our next tactical move we came across the joyous site of the Inters stopped for lunch at a pub around 75 miles in. Back into 2nd place, then joy of joys, we came across the Advanced at Pewsley at around 82 miles in. Joint 1st! We decided as a team to let the Advanced guys get a head start and enjoyed our break at Pewsley.

As I said to the guys before we started, I expected things to get harder after Pewsly and we werent disappointed. So Roisin made the call to get the train after completing her 1st century ride at a stunning 15mph average, and Francesca decided to keep going through the tough last hilly part at her own pace which she completed not long after the group. A great achievement indeed considering the wind at the end. 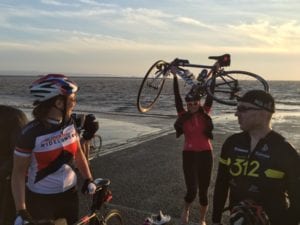 The groups pretty much stayed together most of the day which was really encouraging. Roger, Sally, Christian and Sibylle did a great job of keeping everyone together. Myself, Patricia and Gosia managed to merge with the Intermediates before the glorious Cheddar Gorge descent to form a Rouleurs Super Group! Bar Ian having a little off on the Gorge it was great, especially the ice cream at the bottom.

Unfortunately for me I noticed a puncture just as we were leaving the Ice Cream store so sent the guys on. Even more unfortunate for me, it was very windy trying to catch them the last 12 miles. With my garmin dangerously low on battery I luckily ran into Gosia and Catherine so they could act as my navigators and we all rolled in together to meet the guys at the beach.

This was my 3rd year doing the ride and it was great as always, but the most satisfying part of the entire day was seeing some of our newer members complete this kind of distance/speed for their very first time. Probably something they didnt think was possible but they did it with gusto! Kudos all round guys, you deserve it! No doubt we’ll be back next year with even more stories to tell!