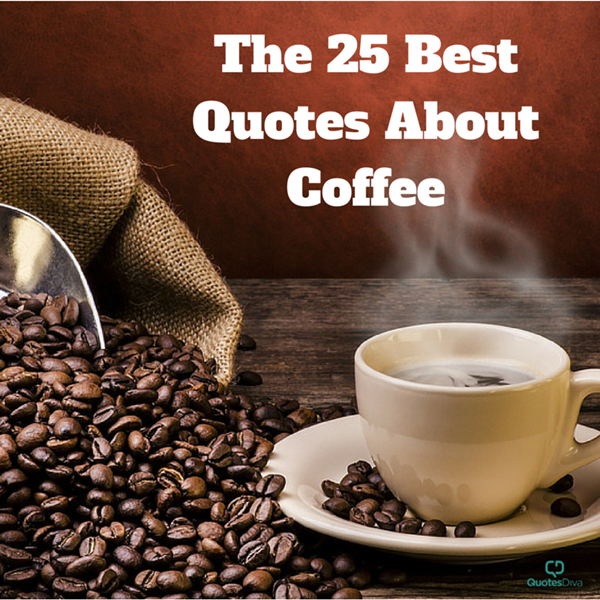 We reach for the French press in the morning before ever dreaming of getting work done. Our K-pods and pour-overs sustain us. And we’re not alone—some of history’s most legendary men and women lived for that caffeine jolt, too. Writers like Gertrude Stein and emperors like Napoleon Bonaparte needed a little kick to get moving.

Here, we’ve compiled our favorite quotes about coffee from throughout the ages. You’ll find that even unexpected figures like Jackie Chan and Bach make appearances, extolling the virtues of espressos, lattes, and simple black coffee.

Scroll down to see what these intellectuals and celebrities have to say about the importance of coffee.

“Should I kill myself, or have a cup of coffee?”

“It is inhumane, in my opinion, to force people who have a genuine medical need for coffee to wait in line behind people who apparently view it as some kind of recreational activity. I bet this kind of thing does not happen to heroin addicts. I bet that when serious heroin addicts go to purchase their heroin, they do not tolerate waiting in line while some dilettante in front of them orders a hazelnut smack-a-cino with cinnamon sprinkles.”

“Even bad coffee is better than no coffee at all.”

JERRY SEINFELD
Who? Comedian who loves cars and coffee

“We want to do a lot of stuff; we’re not in great shape. We didn’t get a good night’s sleep. We’re a little depressed. Coffee solves all these problems in one delightful little cup.”

“Coffee is good for talent, but genius wants prayer.”

FLASH ROSENBERG
Who? Cartoonist and performer

“I believe humans get a lot done, not because we’re smart, but because we have thumbs so we can make coffee.”

“He was my cream, and I was his coffee. And when you poured us together, it was something.”

“Without my morning coffee I’m just like a dried up piece of roast goat.”

“I would rather suffer with coffee than be senseless.”

JONATHAN SWIFT
Who? Satirist and writer

“The best Maxim I know in this life is, to drink your Coffee when you can, and when you cannot, to be easy without it.”

“A cup of coffee – real coffee – home-browned, home ground, home made, that comes to you dark as a hazel-eye, but changes to a golden bronze as you temper it with cream that never cheated, but was real cream from its birth, thick, tenderly yellow, perfectly sweet, neither lumpy nor frothing on the Java: such a cup of coffee is a match for twenty blue devils and will exorcise them all.”

“I judge a restaurant by the bread and the coffee.”

“Black as the devil, hot as hell, pure as an angel, sweet as love.”

“I have measured out my life with coffee spoons.”

“That’s something that annoys the hell out of me—I mean if somebody says the coffee’s all ready and it isn’t.” (Catcher in the Rye)

EDWARD ABBEY
Who? Anarchist and author

“Our culture runs on coffee and gasoline, the first often tasting like the second.”

“Like everyone else who makes the mistake of getting older, I begin each day with coffee and obituaries.”

“Coffee is a language in itself.”

“Good communication is just as stimulating as black coffee, and just as hard to sleep after.”

“The powers of a man’s mind are directly proportional to the quantity of coffee he drank.”

“Coffee is a lot more than just a drink; it’s something happening. Not as in hip, but like an event, a place to be, but not like a location, but like somewhere within yourself. It gives you time, but not actual hours or minutes, but a chance to be, like be yourself, and have a second cup.”

“There are three intolerable things in life—cold coffee, lukewarm champagne, and overexcited women…”

“This coffee falls into your stomach, and straightway there is a general commotion. Ideas begin to move like the battalions of the Grand Army of the battlefield, and the battle takes place. Things remembered arrive at full gallop, ensuing to the wind. The light cavalry of comparisons deliver a magnificent deploying charge, the artillery of logic hurry up with their train and ammunition, the shafts of with start up like sharpshooters. Similes arise, the paper is covered with ink; for the struggle commences and is concluded with torrents of black water, just as a battle with powder.”