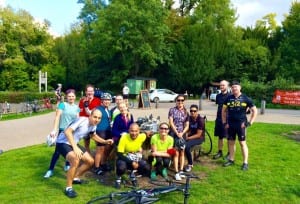 Whilst we are a friendly casual cycling club, we do still adhere to the laws of the road and certain group behaviors so feel free to have a breeze through our club guidelines.

2. Road bikes and tyre width: Club rides are for road bikes with tyres no wider than 27mm (no hybrids). Please do not sign up for a ride unless you have one of these bikes.

3. Aerobars: Please do not bring a bike with aerobars to a club ride. These are for individual time trial efforts and present a danger to others in group riding. Exceptions will only be made in relation to Advanced+ members who are leading a ride and are prepared to spend a lot of time at the head of the peleton.

4. Headphones: Please do not wear headphones whilst riding. Communication is important for everyone's safety whilst riding in a group.

6. Safety: You are responsible not only for your own safety but for the other riders around you. The role of the ride leader is limited to navigating and, as far as possible, making sure the group stays together and respects other road users. The ride leader is NOT responsible for your safety; you are.

7. Don't race: A club ride is a group ride, it is NOT a race. You can race to your heart's content in organised competitive events but please not on club rides.

9. Do not overtake the rider(s) at the head of the group. When someone does this, others “take the bait” and before you know it the group format is in tatters. Anyone accelerating ahead of the group will be assumed to be on another ride of their own devices. They will not be called after or chased after if they take a wrong turn. We normally wait for people who drop off the back of the ride. We do NOT wait for people who go off the front.

10. Ride together and wait: When approaching a junction, slow down a little to allow the riders behind to catch up. Don't swarm around cars at traffic lights, filtering on the left and right but imagine the group as one large vehicle and keep the group together. Everyone takes time to set-off, clip-in and get settled back in the saddle so the ride leader will accelerate slowly to keep the group compact. Be patient and maintain your position in the group. Be ready to re-group at the top of hills and whenever the ride leader so decides.

11. Group riding etiquette: Aim to ride with less than one metre between you and the rider in front. NEVER ride more than two abreast and single-out if a car behind cannot otherwise overtake the peleton shouting “Car back!” (See RPR Group Riding Etiquette document for more details).

12. Warnings and stopping: Front riders should warn of hazards ahead and if they are slowing down or stopping verbally and/or with hand signals. Pass any warnings and hand signals down the line so that they reach the back.

13. Mechanicals: If someone punctures or has a mechanical, everyone is expected to stop. So in return for delaying everyone, ensure you start the ride with a spare inner tube, tyre levers, allen keys/a multi-tool and a pump. Endeavour to maintain your bike in a roadworthy condition.

14. Standard/Ranking: In the interests of ensuring that riders are, as far as possible, of the same standard on any club ride, only members who have the ranking stated in the event title will be allowed to participate in the ride. This applies equally to members who have a higher ranking as to those with a lower ranking than that stated for the event.

15. Gatecrashing: Do not put the ride leader in an awkward position by attempting to gatecrash an event which is already full. Ride numbers are limited for a reason – the safety and enjoyment of the group. If you turn up to a ride without having a place, you will only be allowed to join the ride if a further co-host is required and you agree to act as such by undertaking organisational duties such as backmarking and assisting slower riders.

16. If you are unable to attend a ride, please amend your RSVP asap so it allows another member to attend. Failure to do so could result in refusal for future rides. 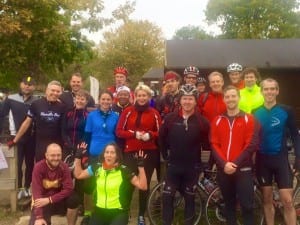 Please show respect for your fellow riders and other road users by observing the following points of riding etiquette:

1. When the road is narrow, the riders at the front of the peleton will ride in single file. Follow their lead and adopt single file formation. Do not overtake other riders in the group for no good reason. Any rider riding two-abreast or overtaking defeats the whole point of riding in single file, angers motorists and exposes himself to increased danger. If there is a gap in the peleton and you want to move up the peleton to fill it, look behind you before pulling out to make sure no cars are coming up from behind.

4. Aim to ride with less than one metre between you and the rider in front.

5. Do not pull out and overtake just to get to the front of the peleton because you'd like to grab the wheel of one of the stronger riders at the front. Someone else is already doing that and will not appreciate your pushing in.

6. Do not overtake downhill unless you've first checked behind you that no car is coming and you have a space to pull into after overtaking. Don't overtake when riders are shouting "slowing/stopping" just to get to the front.

7. Do not overtake the leader of the peleton at a speed significantly faster than he is going at (ie. leaving a gap so that the ride leader does not benefit from your draft). If you have energy to spare, place yourself directly in front of the ride leader (ie.without forcing him to accelerate to take your wheel). You can then use your energy for the group by taking the wind and helping the peleton maintain the current pace. If you ride well ahead of the leader and “go it alone”, you look silly when you run out of steam and the peleton catches you up and/or overtakes you.

8. If you don't have the strength to take the front and maintain the current speed of the peleton, don't take the front! If you do so, the stronger riders at the front will just overtake you back as soon as your pace slackens. An exception is where the whole peleton is rotating the front ("through and off") in which case ride at a pace that you can maintain for a couple of minutes without completely exhausting yourself.

9. When doing a stint at the front, try to maintain a steady line and a constant speed and cadence.

10. If you are doing a stint at the front and want a rider behind to take over from you, give a flick with your right elbow.

12. Call out “On your right!” when overtaking other riders in the peleton or any other cyclist in the road.

14. Point out pot holes and other obstacles in the road. Pass on any signals and calls given by the rider in front in order to notify riders behind you. 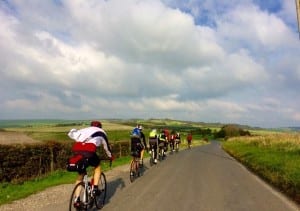 RPR operate rides based on a ranking system.

If you are new to the club, then you will need to self record a lap time around Richmond Park in either direction.

Each lap around the park is almost 7 miles long.

Please note that a 20mph speed limit is in operation around the park and we advise members to keep within the law.

Rankings are loosely based on the following times.

Your lap time should be on the basis of an unassisted effort ie. without drafting another rider.

Your ranking will be revised on club rides taking into account your bike handling skills, group riding skills and your endurance over different terrains. The general speeds for the different groups will be approximately as follows:
Advanced-16-17+mph moving average
Intermediates-14-15mph " "
Steady pace- 12-13mph " "

Please note that the club is keen to ensure that riders participating in club rides are, as far as possible, of the same level. Accordingly, if the club organisers agree to give you a higher ranking, you will no longer be able to participate in rides for your former ranking unless a co-host is needed for the event and you agree to undertake organisational duties such as backmarking and assisting slower riders